Thanks to a citizen of Nuevo León who shared the case on social networks, Jane’s case reached the ears of the US authorities who already have her under their protection

After 28 years, a woman who was reported missing in the American city of Houston, Texas, was found alive in Monterrey, Nuevo León.

It is about the incredible story of Jane McDonald, who on the morning of November 12, 1993, left her home for her workplace … and never returned. Four days passed when his car, a blue Ford Mustang, was found abandoned near her home. When it was searched, the woman’s belongings were not found nor was there any sign of violence.

The authorities then pointed out that Jane, who was 34 years old at the time, had been the victim of kidnapping. Even the Federal Bureau of Investigation (FBI) included her on its most-wanted list. 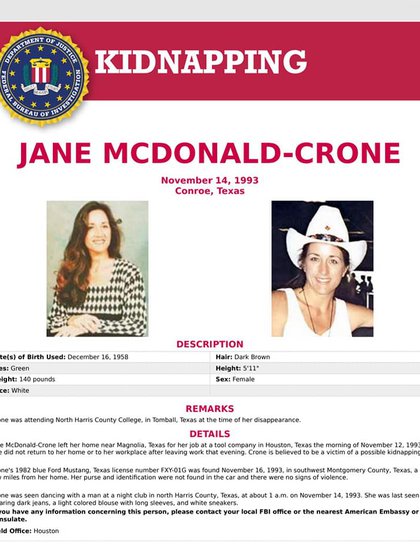 And so nothing was known about this woman until a few days ago when a citizen of Monterrey, the capital of Nuevo León, found Jane in a situation of destitution. Abraham González said that when he left a pharmacy, he found a person on the street, whom he approached to provide help. Then he realized that this person was a woman who spoke English.

“I gave her money, I bought her electrolytes, a cream for sun protection, but I never imagined that he was a person who had been kidnapped and who had been here in Mexico for so many years,” Abraham said through Facebook, where he shared photos of Jane inviting her friends to do “a charity work” and help her. 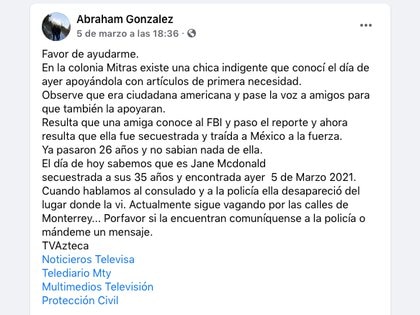 After that, several people found out about Jane’s case and it reached the United States Embassy in Mexico. After contacting the US authorities, it was found that the woman was Jane McDonald, so she began to be searched on the streets of Monterrey.

And a couple of days later, thanks to reports from people walking her down the street, Jane was found and made available to US authorities for her return home.

Please help me. In the Mitras neighborhood, there is a homeless girl that I met yesterday supporting her with basic necessities. Note that she was a US citizen and spread the word to friends to support her as well. It turns out that a friend knows the FBI and passed the report and now it turns out that she was kidnapped and brought to Mexico by force. 28 years have passed and they did not know anything about her. Today we know that Jane McDonald is kidnapped at 35 and found yesterday March 5, 2021. When we spoke to the consulate and the police she disappeared from the place where I saw her. Currently, she continues to roam the streets of Monterrey … Please, if you find her, contact the police or send me a message. (Sic), ”Abraham wrote in a new publication. 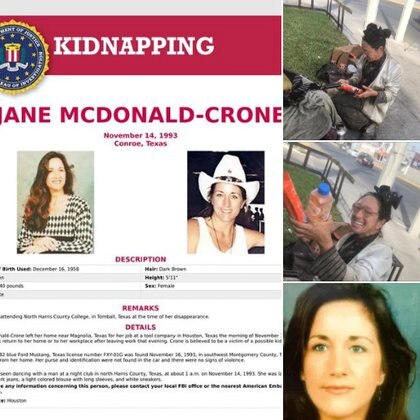 “I just thank God for this, and I hope that Jane will soon be reunited with her family, with her sister, with her daughters,” he concluded.

AMLO calls to ‘stop’ China: more integration between Mexico, the US, and Canada