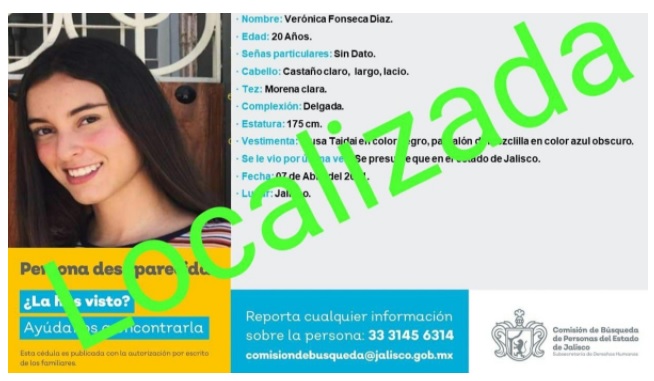 Verónica Fonseca Díaz, a young woman who was reported missing in the port of Manzanillo, Colima, was located in the municipality of Teuchitlán, the Government of the State of Jalisco reported this Thursday, April 15.

In his publications, he pointed out that Verónica had a strong argument with her family after the death of her father, as well as because of her sexual orientation, for which she would have been taken to a supposed rehabilitation center against her will.

As a result of this situation, the Government of Jalisco explained that after the disappearance of Verónica Fonseca Díaz, “ and with the data that was offered through open sources (social networks) ”, the actions were carried out for her search with a gender perspective.

“Verónica was located Thursday, April 15, in the municipality of Teuchitlán, Jalisco, in the Valles region, thanks to the coordination work between the staff of the Local Search Commission, the Directorate of Sexual Diversity of the Subsecretariat of Human Rights of the Government of Jalisco and the Search Group of Teuchitlán “

The Government of Jalisco specified the location of Verónica Fonseca Díaz

In the same way, Alondra confirmed that Verónica was located. She also thanked all the people who showed their support during the days of the search, as well as those who kept up to date. Verónica Fonseca Díaz is already in the company of her relatives.