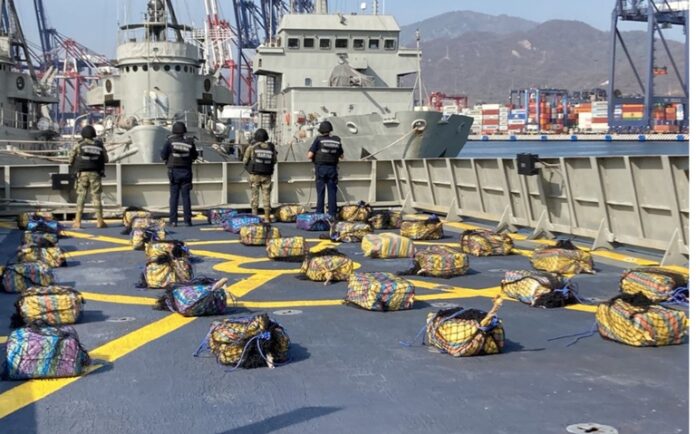 The Mexican Navy seized a total of 1,700 kilograms of cocaine that were transported in a small vessel off the coast of Manzanillo, Colima.

This action was carried out 550.4 kilometers southeast of the coast of Manzanillo, Colima, by personnel assigned to the Sixth and Eighth Naval Zone and agents of the Pacific Naval Force, who detected the boat carrying a crew of four.

According to naval information, upon noticing the presence of the air and surface units, the traffickers started throwing objects into the sea, for which a chase began that culminated in the securing of the vessel and the arrest of the four men on board.

Later, a sea patrol recovered the 35 packages that contained a total of 1,400 packages weighing approximately 1,700 kilograms of alleged cocaine.

“It should be noted that this operation, which was carried out under the trinomial operational concept (ship-helicopter-interceptor), as well as the use of state-of-the-art technologies, prevented the alleged drug from reaching the illicit market,” the agency said.

The detained persons, as well as the boat and the seized drug, were placed under the custody of the Attorney General’s Office (FGR), for the integration of the corresponding investigation folder.

Just last April 15, the Navy reported on the seizure of more than one thousand kilograms of alleged cocaine that was also transported in a small vessel off the coast of Puerto Vallarta, Jalisco.

In the midst of an insecurity crisis, Colima is now fighting the fruit fly

Tropical Storm Blas becomes a category 1 hurricane off the coast of Manzanillo, Colima